On a recent ten day trip to France we (@clogette and I) managed to take in more examples of brutalist and quirky architecture than I could reasonably have expected from a normal holiday. From subterranean car park art installations to giant concrete cheese wheels in an autoroute service area this was a trip that just kept on giving and I’d like to highlight a few of those experiences here…

Let’s start with the car park – Parking Des Célestins in the east-central city of Lyon. This seven-story underground car park is the setting that conceptual artist Daniel Buren has chosen to create Sens Dessus Dessous. It consists of a giant mirror mounted at 45° angle on a rotating platform at the base of the car park’s spiral. Each of the individual archways around the spiral is lit with white LEDs and the whole thing can be viewed from the reverese periscope that protrudes into the centre of the Place des Célestins above ground. It really is a wonderful way to view a car park. 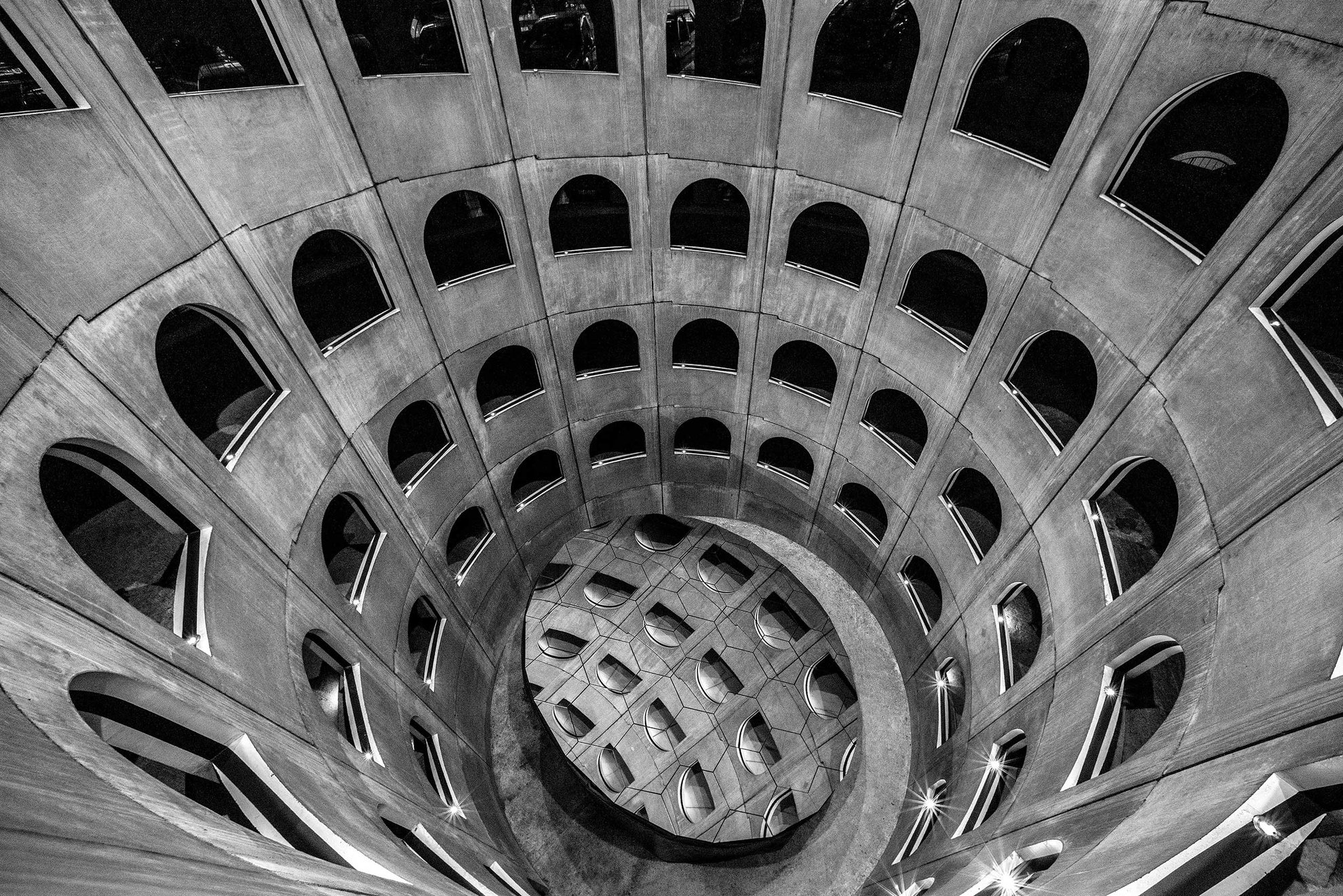 Away from the centre of Lyon and into the suburbs, the États-Unis housing estate is the home of Le Musée Urbain Tony Garnier – an open air museum that guides you through a series of 25 murals depicting the utopian vision of Tony Garnier’s Une Cité Industrielle.

The murals were painted in the 1980s onto the ‘blind ends’ of each housing block and remain in remarkably good (and graffiti free) condition. It is true to say though that we did feel somewhat conspicuous – wandering around the estate audioguides and cameras in hand whilst the local youths wheelied past on their KTMs. The secret is to not make eye contact and we survived the experience both intact and enlightened. 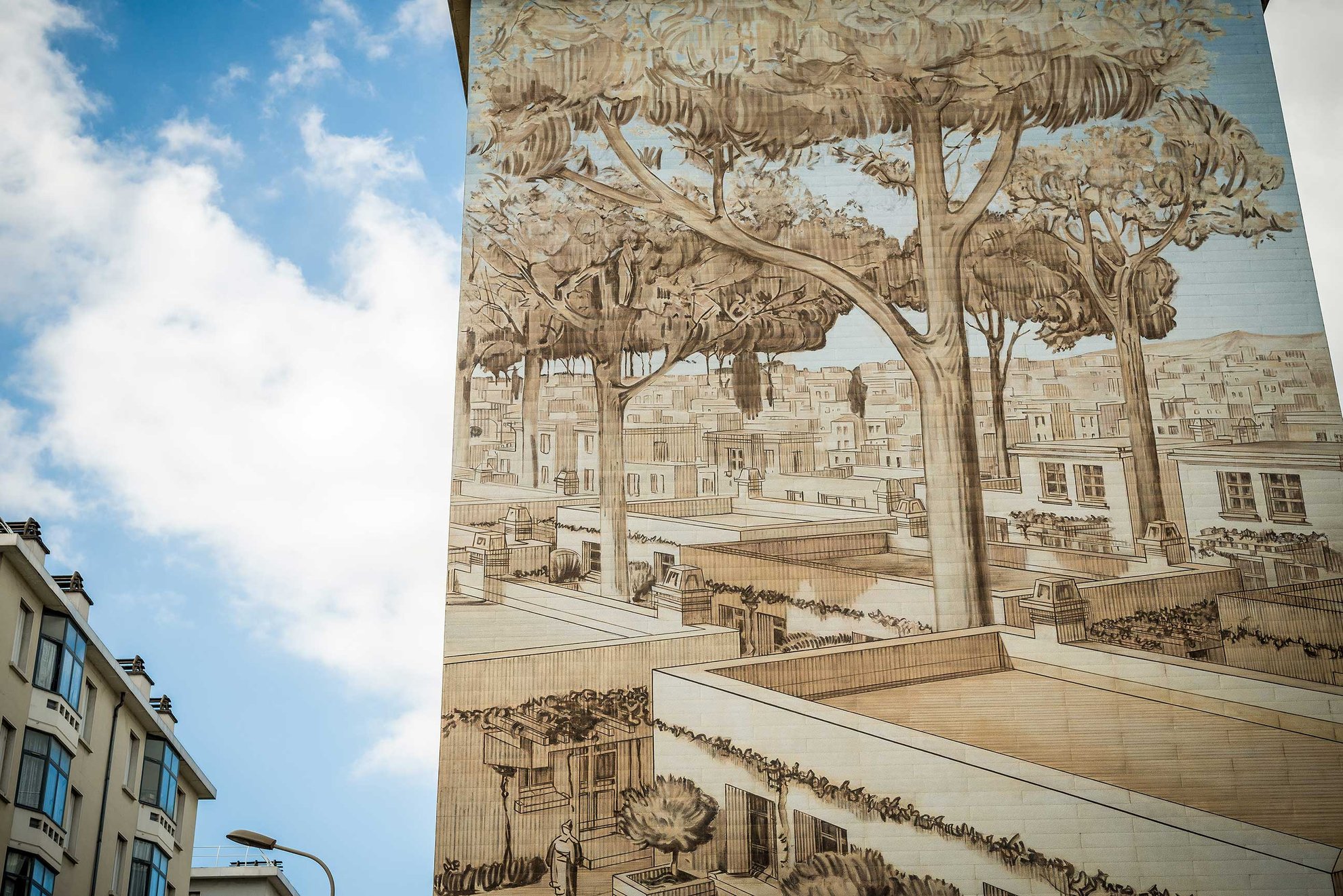 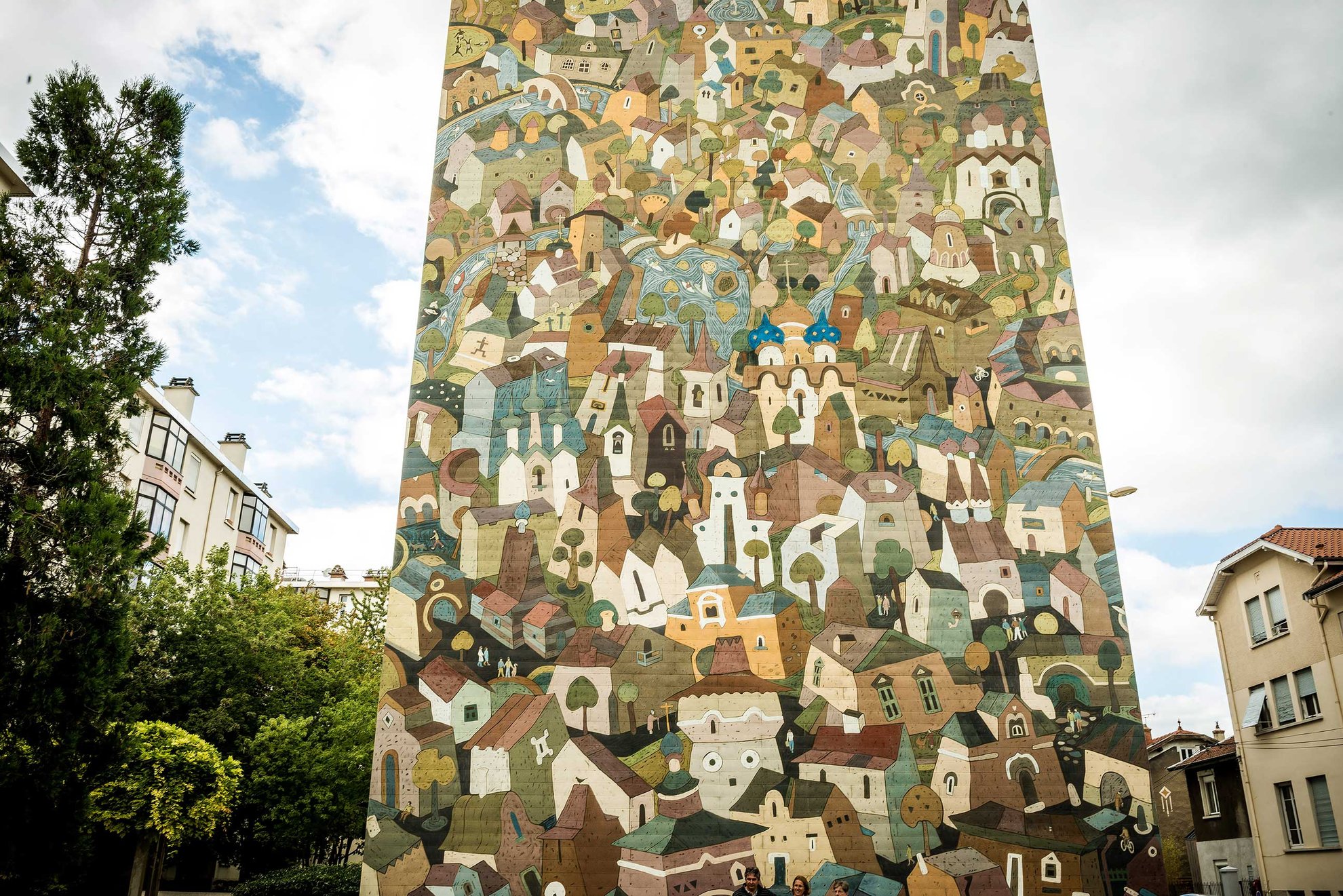 On Fourvière Hill above the old town is the Musées Gallo-Romains, the Gallo-Roman Museum of Lyon designed by Bernard Zehrfuss in 1975. The building is half-buried into the hillside on the edge of the Roman amphitheatre and archaeological site. 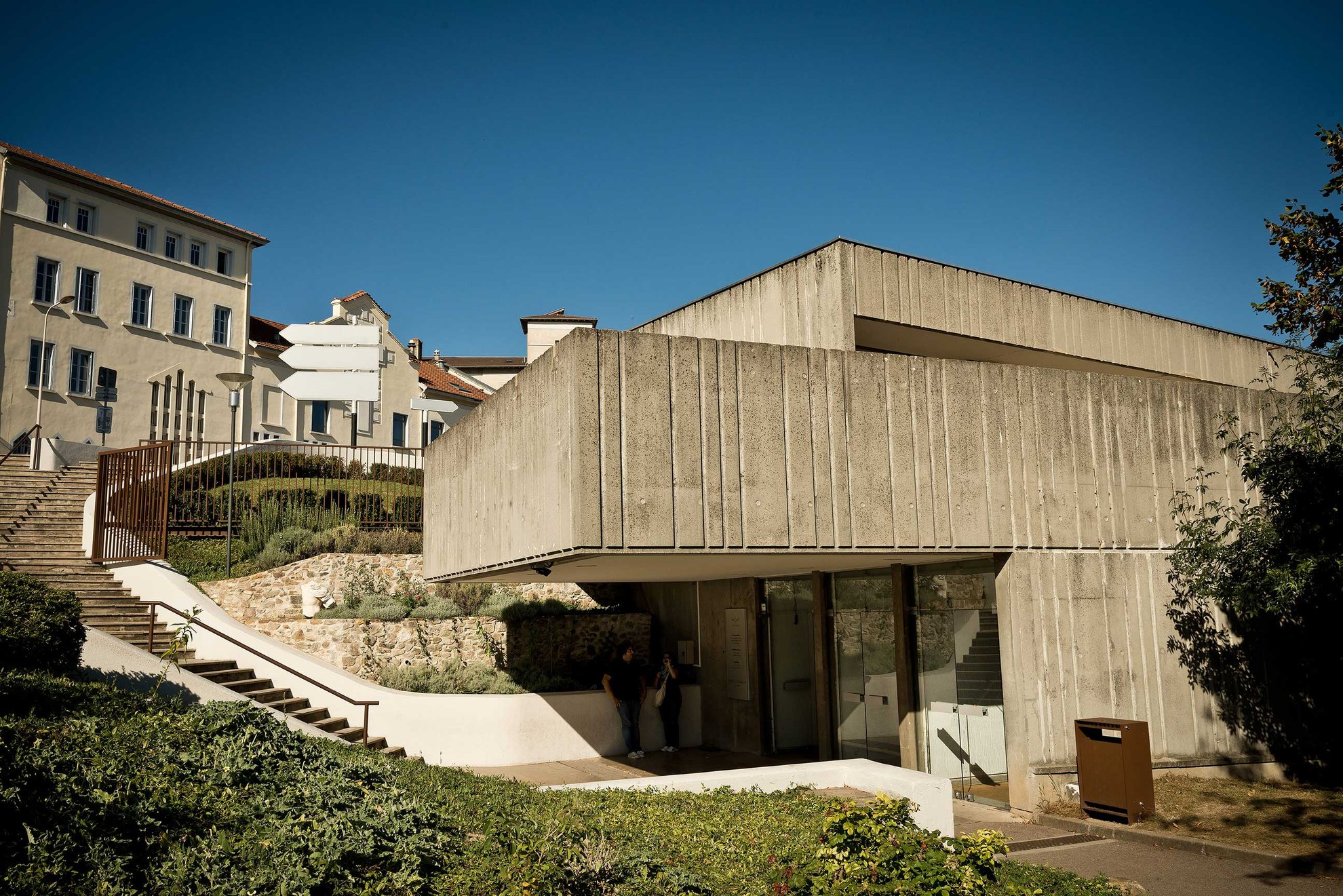 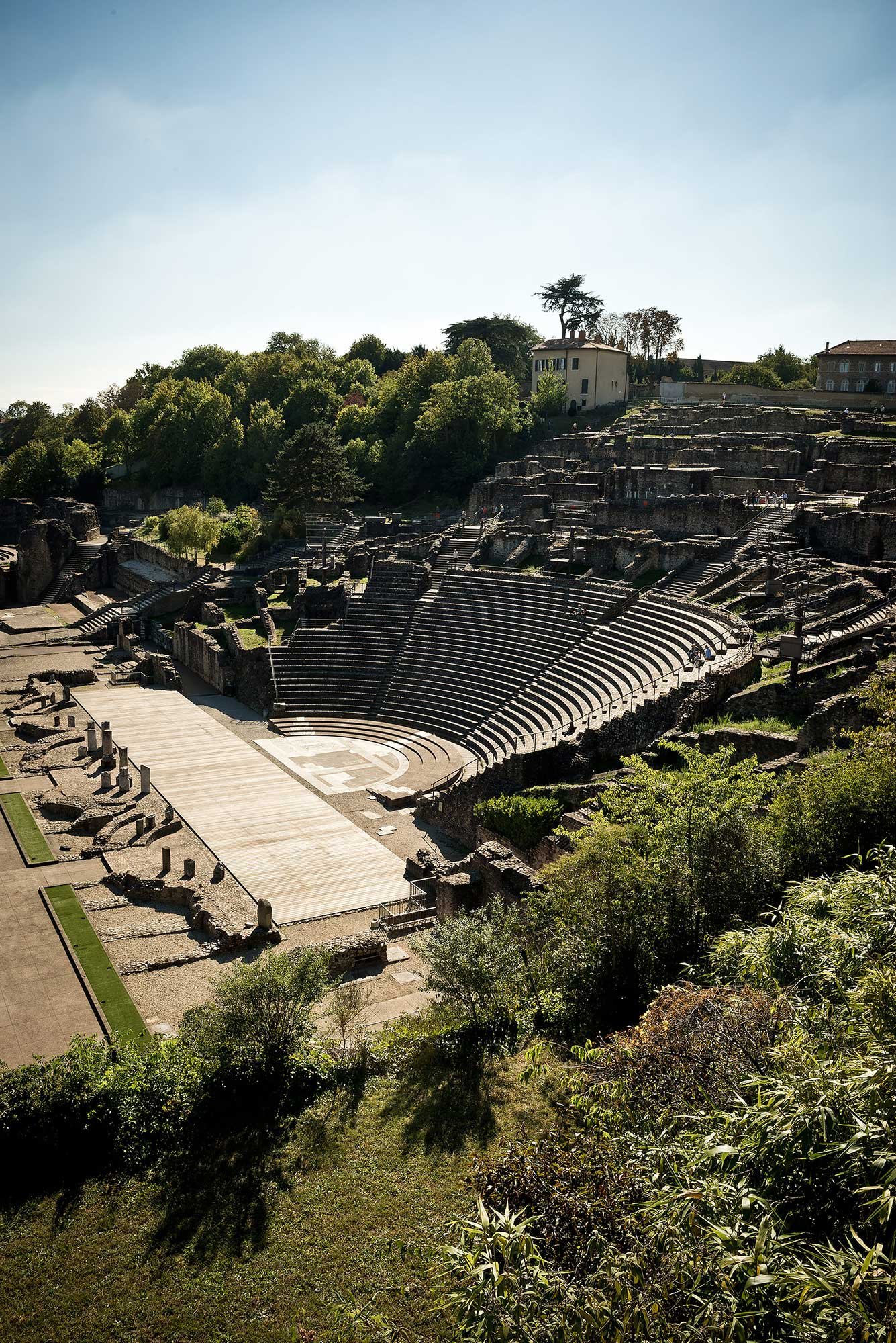 I’m ashamed to say that we didn’t actually make it inside the museum. It was the end of a long day of sightseeing and our minds were focused on walking back down the hill towards the bars and Bouchons in the centre, but having since viewed other Flickr posts from inside I do regret that we didn’t have the time to explore more.

The following day we headed into the Croix-Rousse district. If you are familiar with London then think Shoreditch. We had a great afternoon wandering around the street markets and cafés, but the Wallpaper guide was leading us towards the Traboules – discreet passageways used by silk manufacturers and other merchants to transport their products which primarily associated with Lyon, though they are found in other French cities.

This is the Cour des Voraces one of the most famous examples in the Croix-Rousse, built in 1840 it demonstates an early use of reinforced concrete. 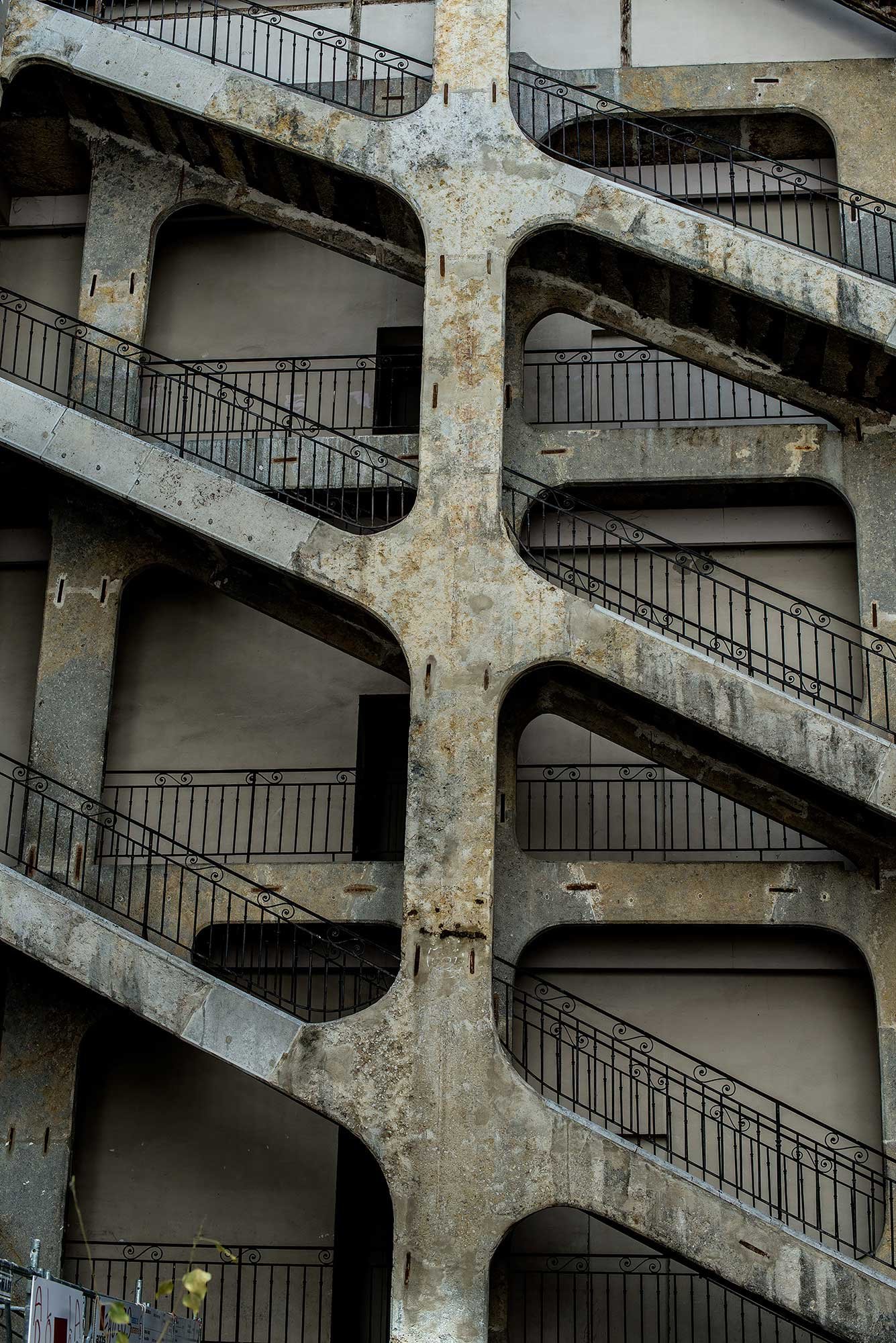 Another day, another car park. This time above ground at Les Halles de Lyon Paul Bocuse in the Part-Dieu district of Lyon, adjacent to the Auditorium Maurice Ravel. 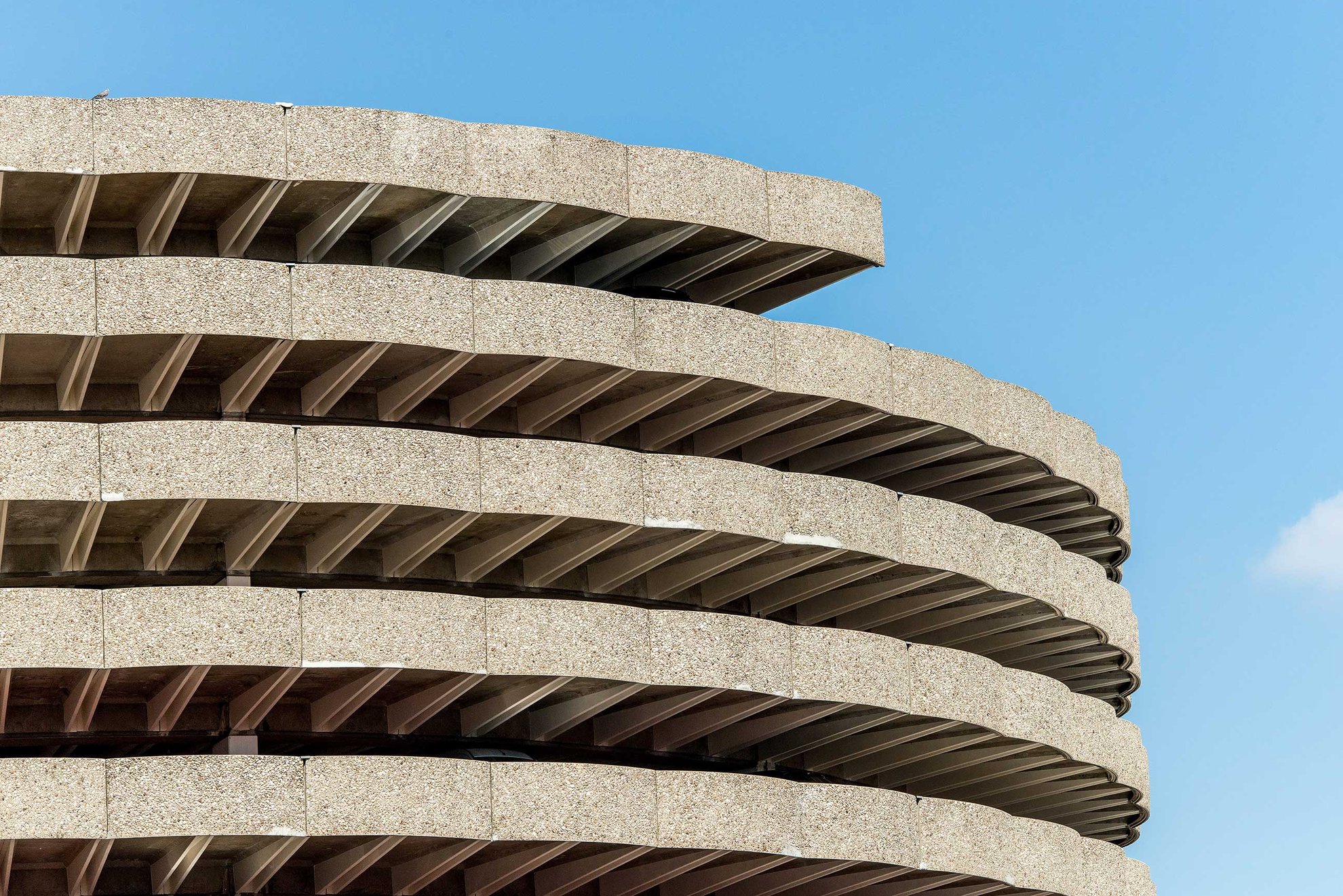 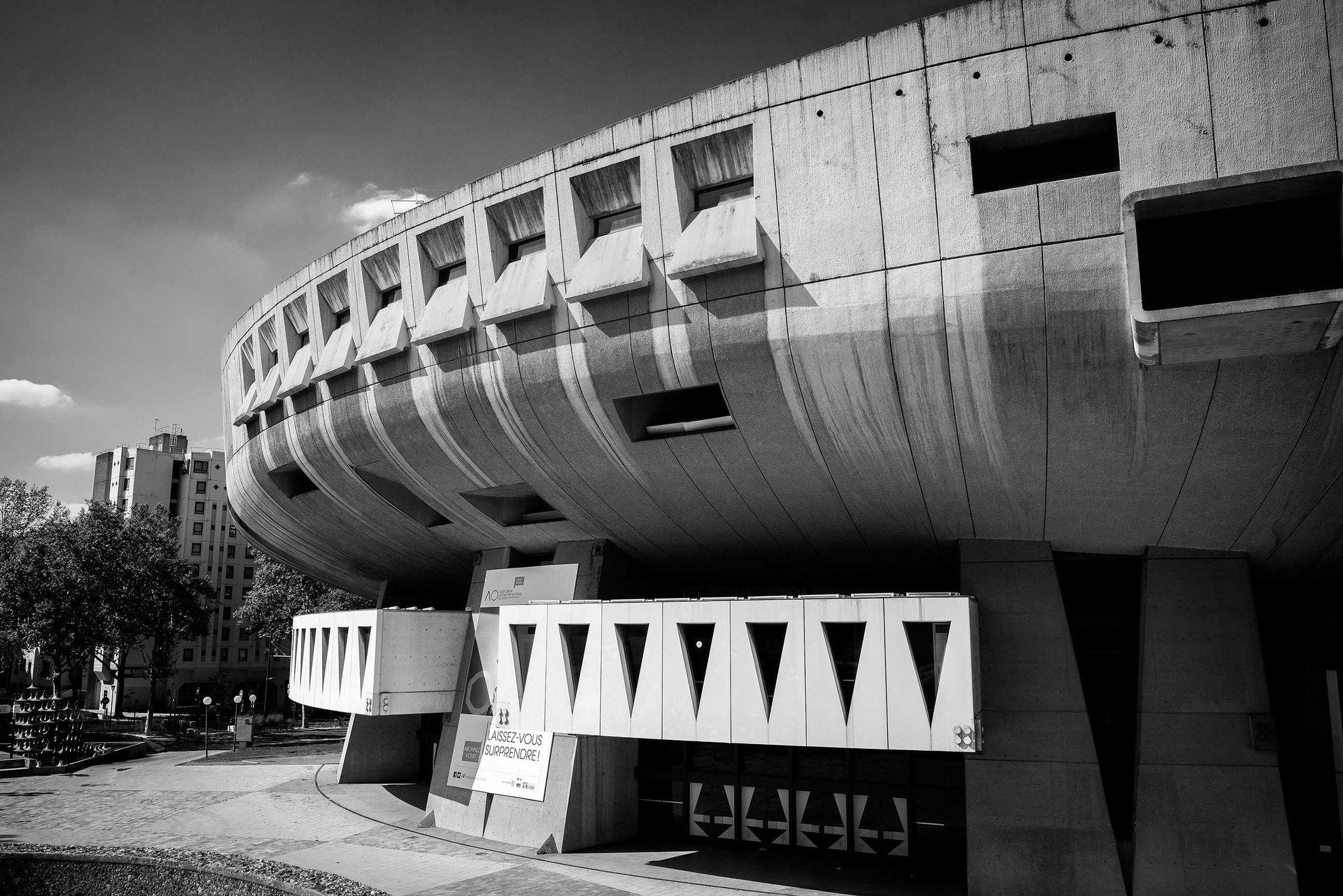 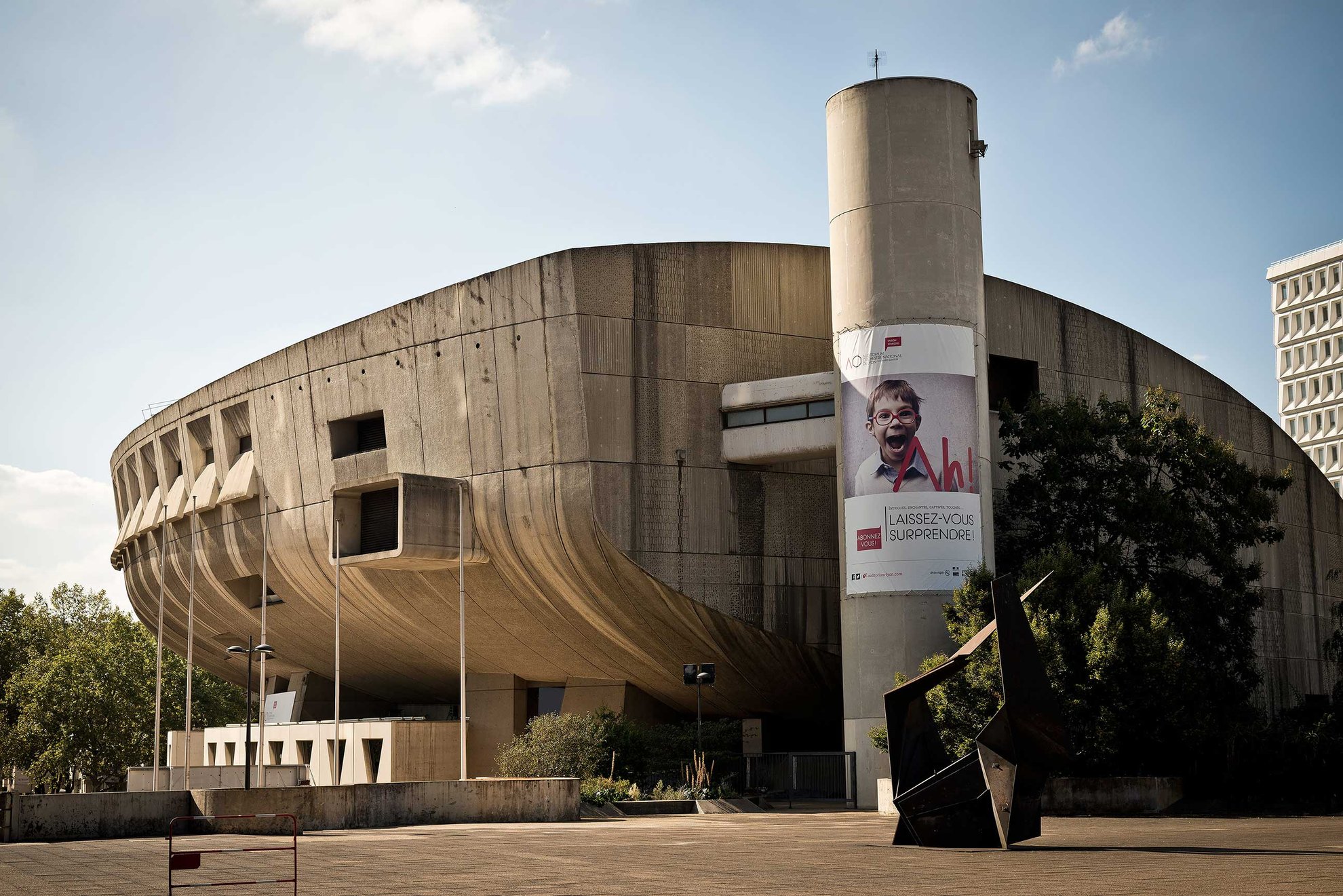 The Auditorium Maurice Ravel was designed by Charles Delfante and Henri Pottier in 1975. It houses a 400m² stage and has capacity for an audience of 2,150. Sadly it was closed on the Sunday that we visited as I would have like to have seen inside this concrete spaceship!

We left Lyon, heading north towards Dole – but first Eveux and the Couvent de la Tourette, a Dominican monastery designed by Le Corbusier in 1960. 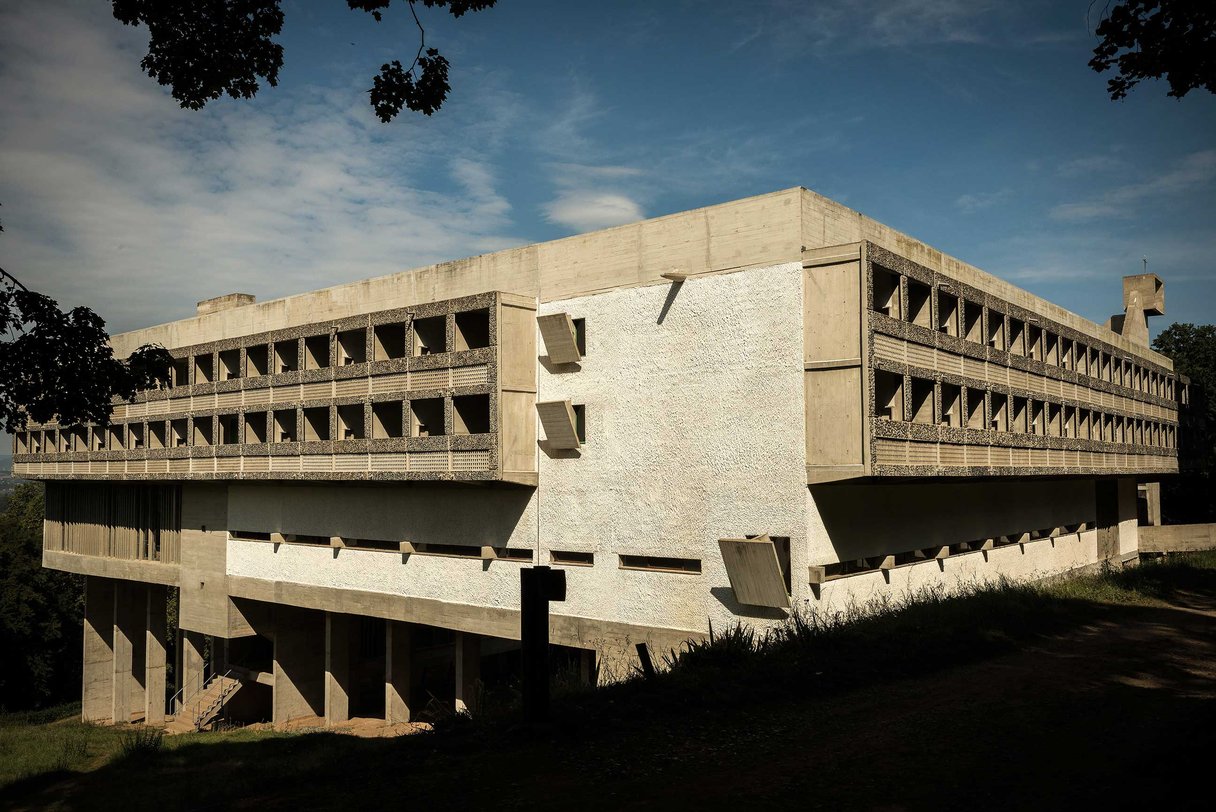 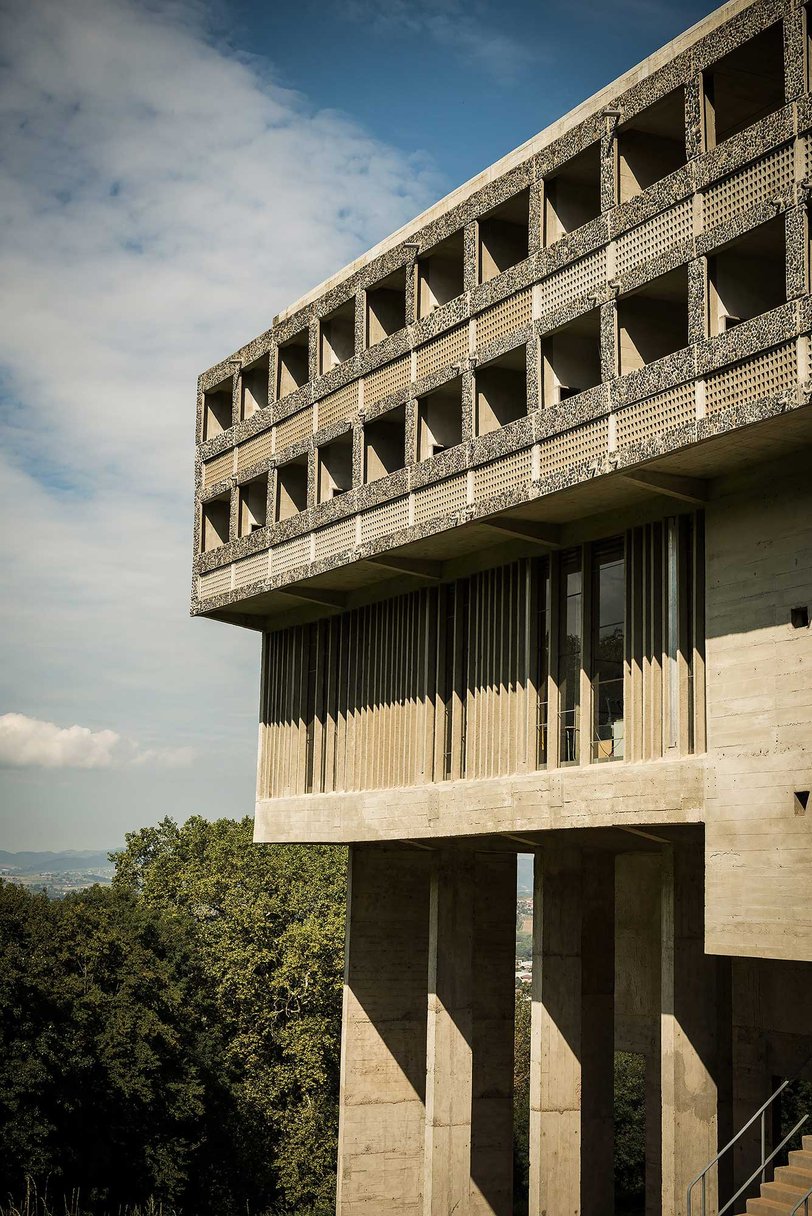 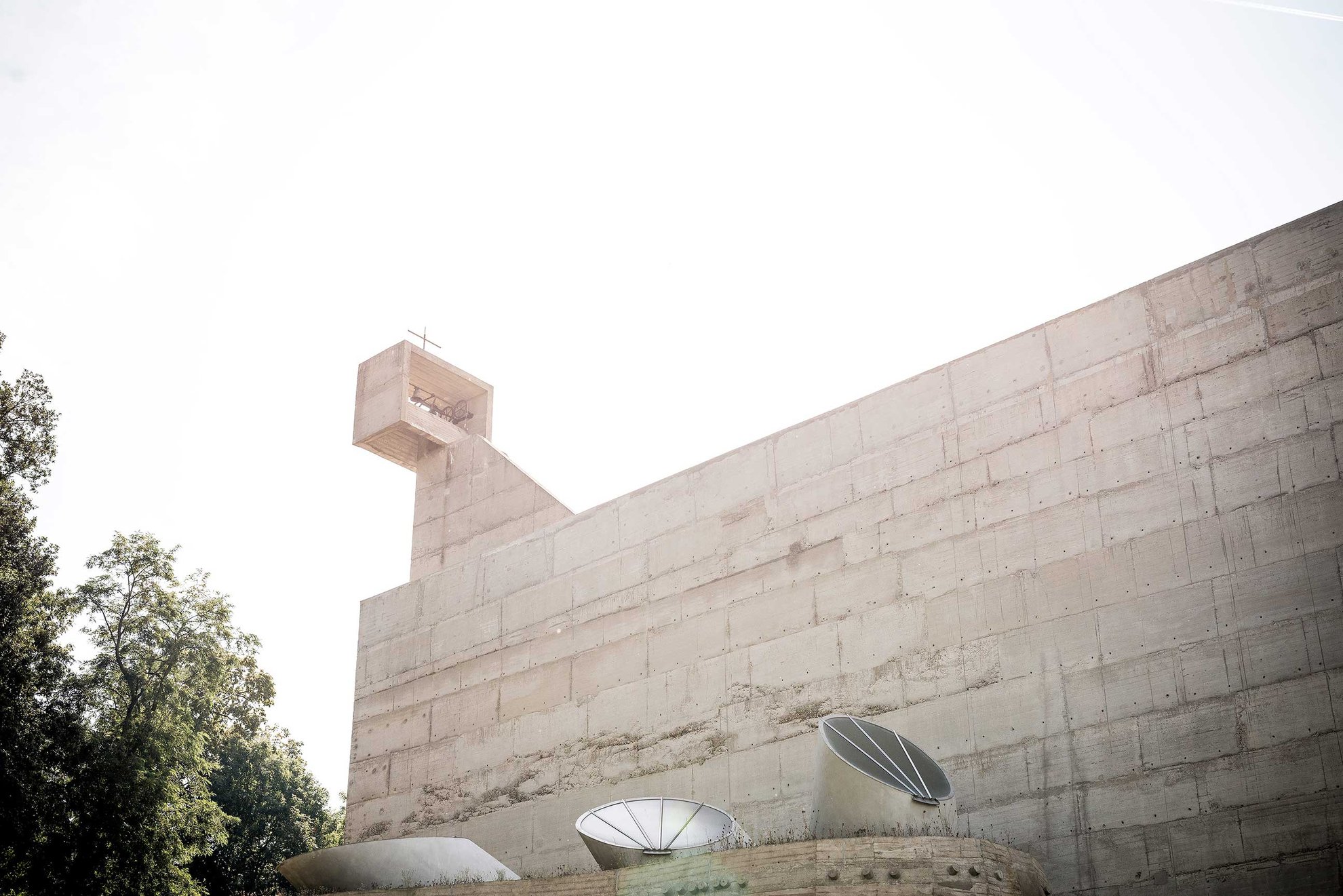 It is a stunning, brutal building set in tranquil French countryside and one that clearly attracts a decent number visitors, judging by the size of the car and coach parking areas. On our visit however, we had the place pretty much to ourselves.

This modernist, unorthodox architecture was championed by Father Couturier, who also worked with Le Corbusier on the Chapel of Notre-Dame du Haut at Ronchamp, which funnily enough we visited a few days later…

My parents had visited Ronchamp a couple of years previously and had good things to say about the place and if you are in the region it is well worth the trip.

The building is playful – almost fairy-tale like – and has some wonderful details both inside and out. Understandably photography is not permitted inside the chapel itself, but they have some good shots on the official website. In addition to the chapel there is also a Renzo Piano designed reception and visitor centre which was added in 2011. The site receives 65,000 visitors each year and is in the running for World Heritage status in 2016. 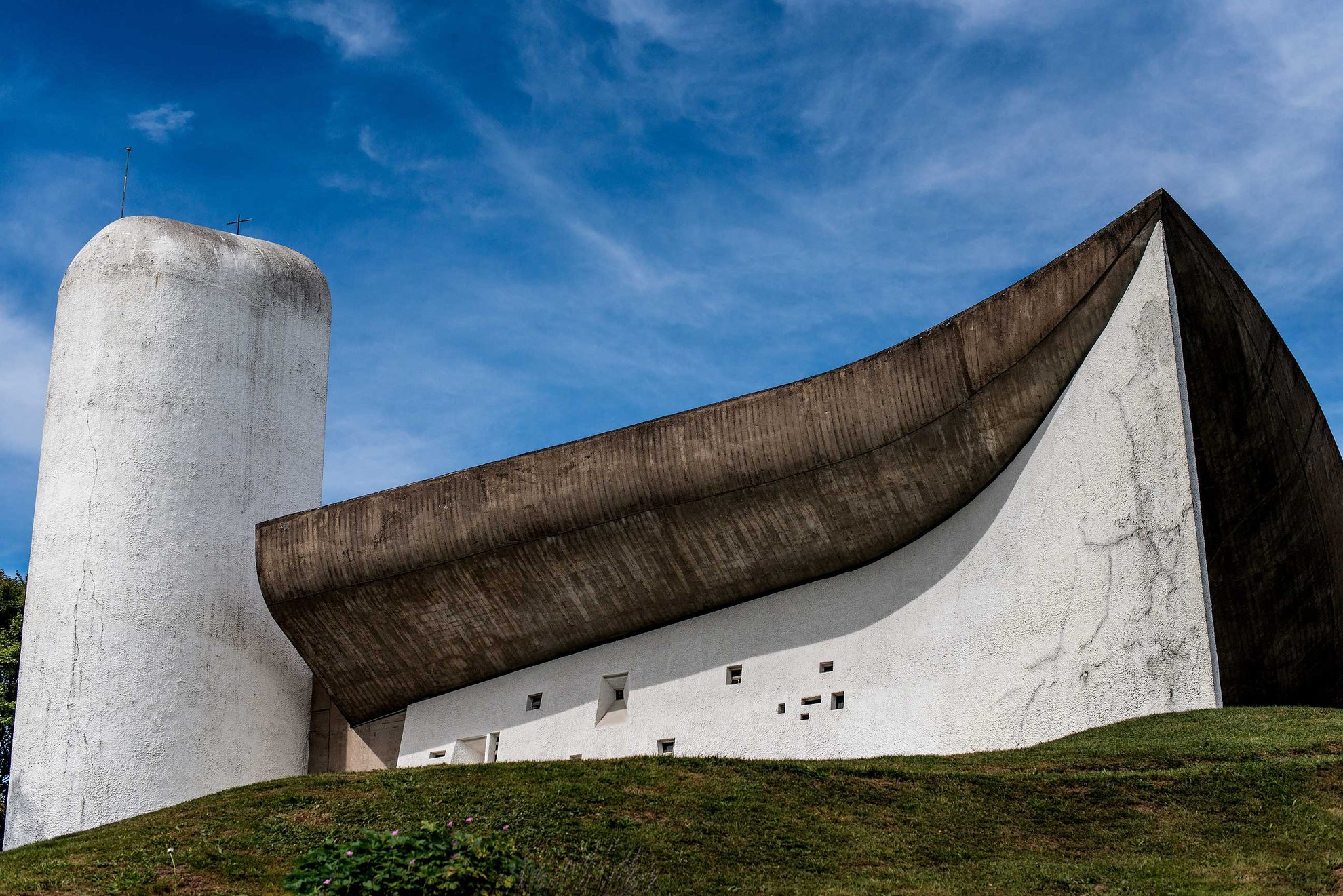 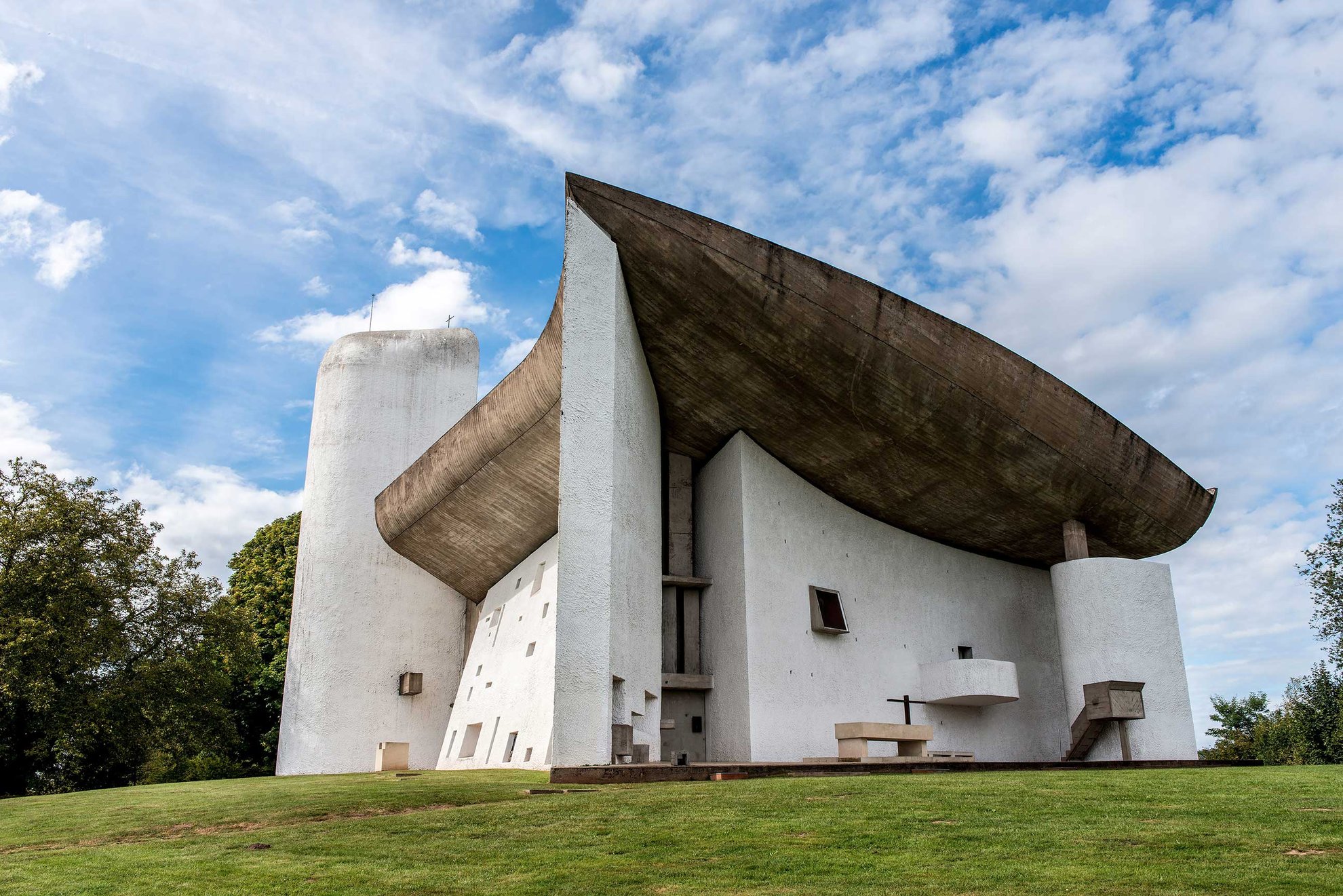 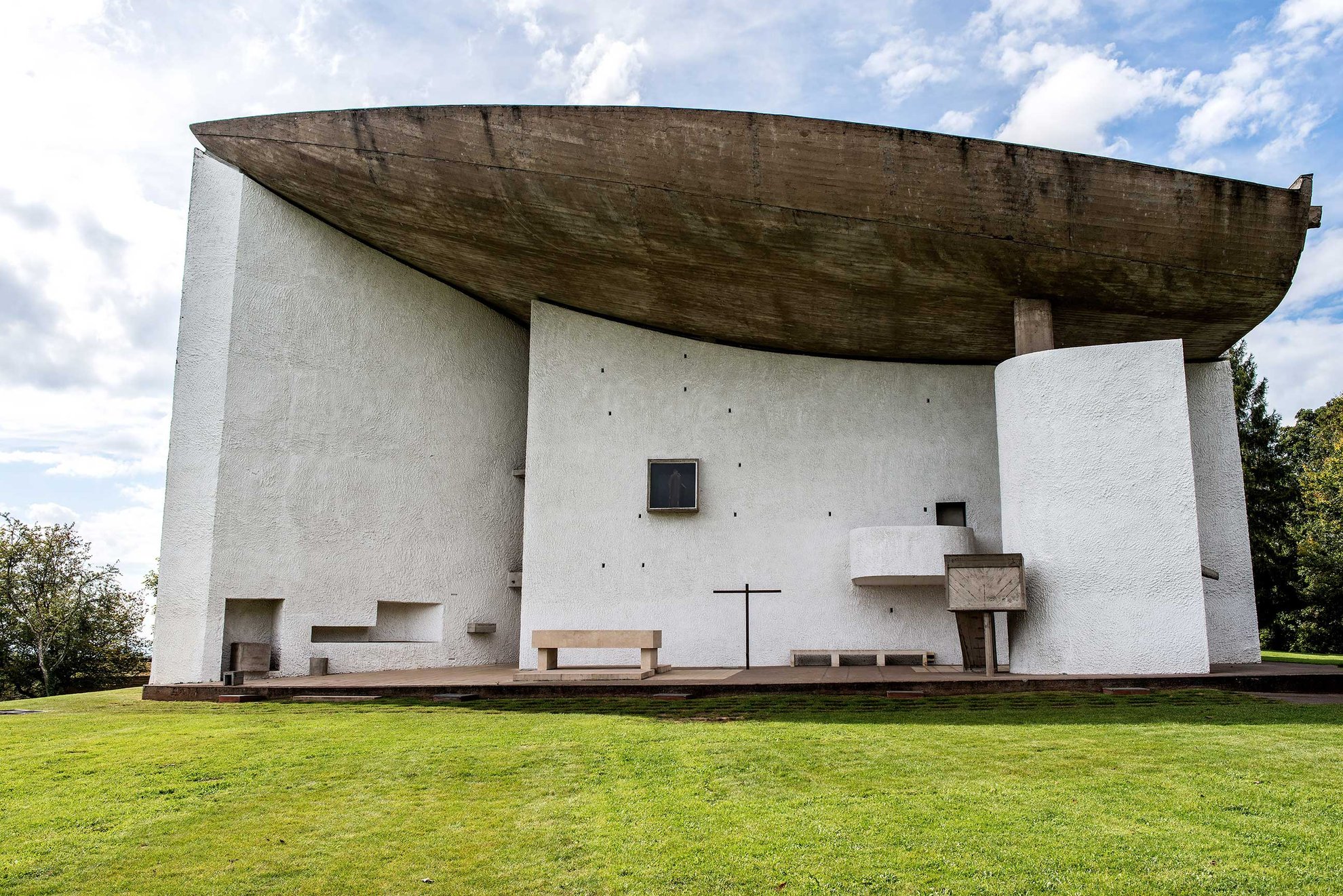 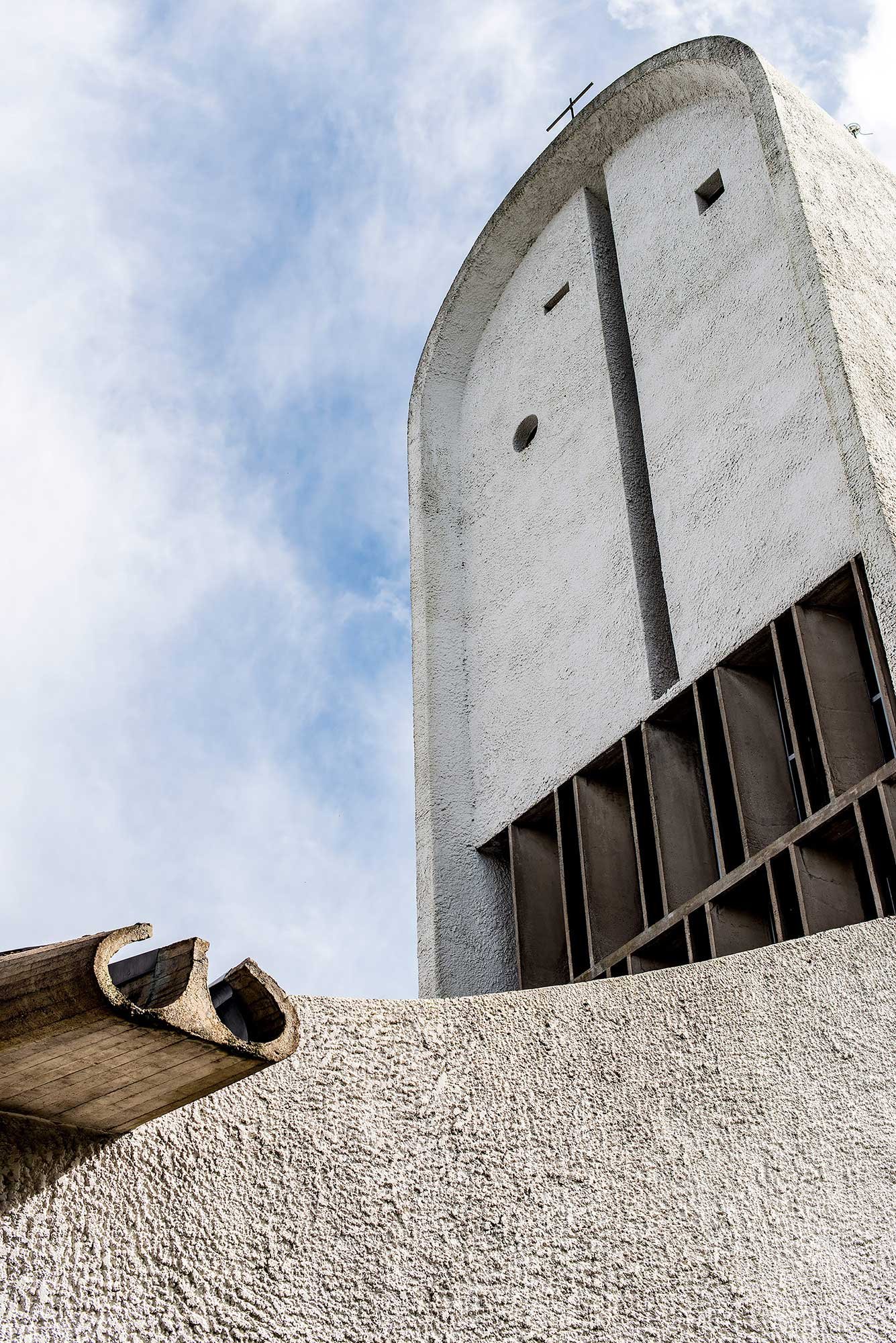 And finally, the giant concrete cheese. We arrived in the Aire Du Jura expecting sculptures and instead found a very interesting and informative exhibition on the production and history of the local comté cheese. The building itself – I’ve since discovered – is called the Circles Pavilion and despite my initial reasoning that it was meant to resemble four comté cheese wheels, it is in fact intended to represent two intertwined barrels. Hey, it’s still a wonderfully quirky piece of architecture for a motorway service area. 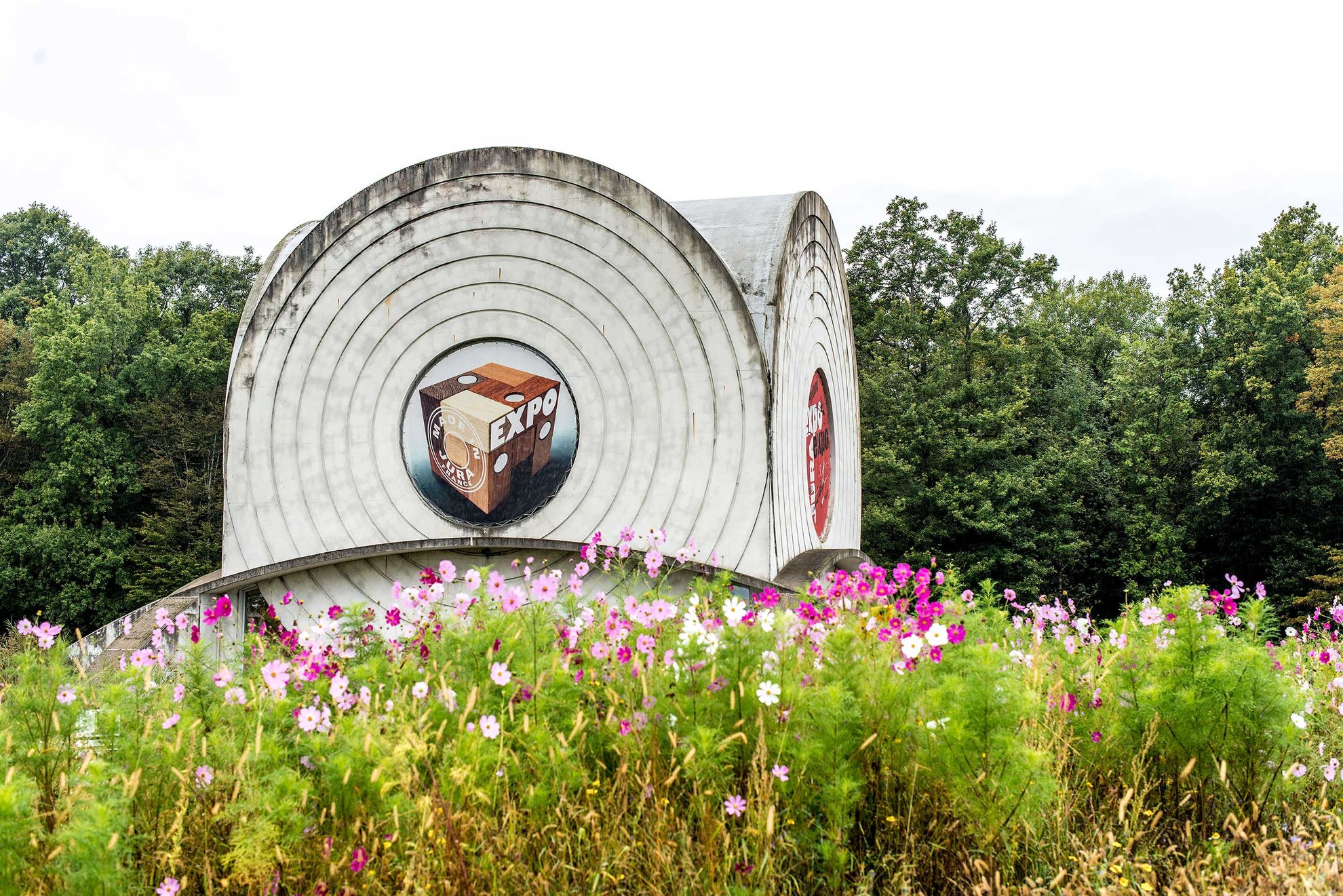 A fantastic trip all in all – I would thoroughly recommend visiting both Lyon and Dole (together with the surrounding Jura region), there is clearly far more to see than just the brutalist and concrete architecture that I’ve highlighted here, but it does break up the monotony of all those vineyards.